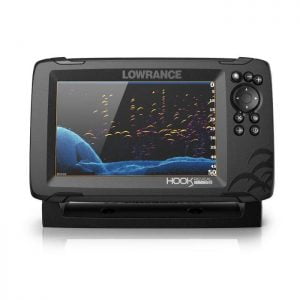 The HOOK Reveal is Lowrance’s fish finder/chartplotter for hobbyists and casual anglers. Out of the modern line of fish finders for Kayaks they’ve most recently released, this one is the least expensive. It’s a massive step up from the HOOK² in quite a few ways. It’s one of the best fish finders if you’re looking for a unit that costs under $900.

Lowrance has gone out of their way to make this unit as simple to use for newcomers as possible – it’s more or less plug-and-play right out of the box, it’s relatively easy to mount, and it comes with loads of user-friendly features. They’ve also added a lot of features the HOOK² didn’t have, and seriously improved the mapping, all while offering a wider selection of transducers.

Most of the problems with this unit come from not knowing exactly what you’re buying. Don’t worry – that’s one of the reasons we write these reviews. We’ll help you get the best bang for your buck when you buy a HOOK Reveal 7, and we’ll tell you about all of our favorite features along the way.

But first, the pros and cons!

The display on the HOOK Reveal 7 is basically exactly the same as what Lowrance used on the HOOK² – a 7” SolarMax HD. SolarMax displays are the standard for pretty much every high-end Lowrance fish finder – and for good reason.

You can use this thing in almost any conditions – rain, shine, fog, and even at night. The screen is bright, and easy to read from a variety of angles. If you’ve got 10 people in your boat, you might want another device or a bigger screen, but for most setups, the 7” will be more than enough for anyone to get the information they need at a glance.

One of the biggest advantages of this model’s display is the up to 4 panel split screens. That means you can have up to four different views at once – it’s common to see the map, DownScan, SideScan, and traditional sonar chart all on-screen at once. You can also adjust the size of these splits, so the panels you find most important are the biggest.

Now that we’ve had a chance to talk about the display, let’s chat for a moment about the interface.

The HOOK Reveal has a touchpad interface with no touchscreen. We really like touchpads – touchscreens can get wet, and that impedes navigation. We do, however, prefer touchscreens for ease of navigation. That’s why we like combination touchpad/touchscreen navigation – something this unit doesn’t offer.

We understand the reasoning, however. Touchscreens are expensive, and this device is marketed toward beginners and budget-conscious anglers.

Fortunately, this unit is pretty much plug-and-play. The menus can be a bit dense, but they’re well laid out, and the keys are super simple. The home key brings you back to the homepage – for most of you, that page will end up being a multi-panel split screen with vital information. There are arrow keys to navigate, an exit key, a select key, and keys for setting waypoints and zooming in and out. You’ll figure it all out in no time flat.

You may remember that, at the top of this review, we mentioned that some users were unhappy about their HOOK Reveal purchase. Many of these users simply purchased the wrong package. Some of these users were, undoubtedly, disappointed in their choice of sonar.

To understand the sonar available, we have to look at the three different transducers available with the device, and what each of them are good at. These transducers are the SplitShot, the TripleShot, and the 50/200 HDI.

You can look at the technical specs toward the top of the article for more information, but the long and short is that the SplitShot is the least expensive, the TripleShot offers SideScan and StructureMap, and the 50/200 HDI offers the best range/depth. The transducer you’ll want will depend on your needs.

Now, all of these transducers offer CHIRP sonar. CHIRP sonar basically gives you better information and more accurate target separation, because instead of only sending out one frequency, it sends out a pulse of different frequencies in order to receive a wider variety of returns. This diversity of returns means the transducer can more accurately assess the size and shape of objects.

The SplitShot and TripleShot both offer 200 kHz CHIRP sonar (which is actually 130-210 kHz sonar). Lowrance claims that this means this frequency “delivers double the CHIRP sonar coverage of most fish finders”.

That’s not as useful as it might seem at first glance. When you’re fishing off steep breaks, or you’re trying to cut out noise, a wide cone isn’t helpful – it’s actively harmful.

The 50/200 HDI transducer fixes this problem by offering a 50 kHz option – a much narrower cone. This cone also goes much deeper, so it’s useful for anglers who want to fish in water columns that extend more than 500 feet down.

The 50/200 HDI does not, however, come with SideScan, which limits some of the imaging and mapping features of your device. That means anglers have a choice to make – do they want better imaging, or do they want a narrower cone for their sonar? We wish anglers didn’t have to make this choice. On a high-end fish finder/GPS plotter, you don’t have to.

Fortunately, the choice is usually obvious. If you know you’ll be fishing in depths below 500 feet, go with the 50/200 HDI. The same rule applies if you’re worried about noise on your sonar for any of the reasons we mentioned. On the flip side, if you want to maximize your mapping and imaging, go with the TripleShot.

Those of you don’t care about any of those things can go with the SplitShot, and save a bit

The imaging you’ll get with the HOOK Reveal depends on your transducer. Those of you who opt for the SplitShot or 50/200 HDI will have DownScan, while those of you who get the TripleShot will also get SideScan.

Many anglers find imaging incredibly helpful. It makes it much easier to see both structure and fish swimming in and around structure. When coupled with your sonar chart, it can seriously improve your catch rate. It’s also useful for pre-fishing lakes.

The imaging on the HOOK Reveal 7 isn’t spectacular – you’re limited to either 455 kHz (for more range) or 800 kHz (for sharper, more accurate images). There are other fish finders that offer imaging with frequencies in the MHz, but they tend to be a lot more expensive than the HOOK Reveal.

All in all, we like the imaging on this device. With the assortment of color palettes available, it’s usually easy to distinguish between structure and fish.

Where this unit really shines for its price is with its mapping.

That is, if you buy the right model.

There are HOOK Reveal 7s that don’t include charts – these units are sometimes called HOOK Reveal 7X. These units don’t come with maps, can’t install or display any maps, and aren’t compatible with Genesis live, a feature we’ll talk about shortly. If you want to make the most out of your fish finder/chartplotter, don’t get a 7X model.

With that disclaimer out of the way, the non-7X models are fantastic. You can get your unit bundled with a variety of different maps. C-MAP Contour+ is one of the best, featuring 24,000 U.S. and Canadian charts with 1-foot contouring. If you want to fish a body of water, chances are that it’s a part of the Contour+ map pack.

You can create a number of waypoints, routes, and tracks on the HOOK Reveal, so you’ll be able to record the route to your favorite fishing spots and navigate to them with ease. This is a standard feature on almost every unit at this price point – it’s nice to have.

All of these mapping features are fantastic – and we saved the best (in our opinion) for last. Genesis live allows you to create your own contour maps, so if there are any bodies of water with contours that haven’t been charted, you can chart them. Best of all, you can share them online.

There’s a pretty active community using Genesis, so you can also download other people’s maps – all for free. This can seriously expand the number of maps you have, and make your fishing adventures all the more exciting.

So here’s the deal. If you want to transfer data on or off your HOOK Reveal, you’re going to put on your shoes, and walk your Micro SD card to and from the device. It’s called “sneakernet”, and it’s how we used to do it back in the old days, with floppy disks. We had to walk them uphill both ways, and…

You get the idea. We wish there was networking on this thing, but given its cost, we understand why there isn’t. It’s supposed to be a beginner-friendly unit anyway, so Lowrance is probably making the assumption that you don’t have a lot of other toys on your boat.

There are a few nifty features on this unit that we want to talk about. One is only available with the TripleShot, while the other two can be used with any HOOK Reveal unit.

The feature that’s available on every HOOK Reveal is FishReveal. FishReveal combines 2D sonar with 3D imaging, and overlays fish arches on structure and other images in your 3D view. This makes it much easier to spot fish in structure. It makes it a lot easier to find larger fish, like bass, swimming among a school of baitfish, especially if they’re near submerged grass or other structures.
The second feature we want to talk about is StructureMap. This is basically an overlay option that allows you to lay your SideScan images over top of your map. This is only available with the TripleShot, but it’s extremely useful for pre-fishing. You’ll be able to go to specific locations on your map, all the while knowing exactly what structure you’ll find around those locations. No surprises, no guesswork.

Finally, the auto tuning sonar. This one is pretty straightforward – the best depth range and sensitivity for the sonar are both automatically determined by the unit. You can turn auto off if you want, but for most beginners and casual hobbyists, the auto tuning sonar is what makes this unit truly plug-and-play.

This is a fantastic unit for beginners and hobbyists who are ready to shell out a little bit of cash for their first taste at a premium fish finder. Our minor gripes with the transducer and lack of networking aside, this is a truly wonderful unit for the cost, and one we highly recommend if you’re looking for incredible mapping for a low price.