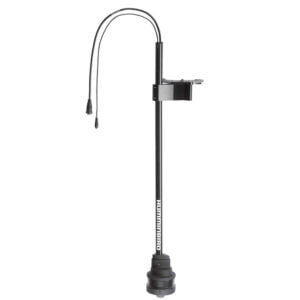 Today’s review is going to be a little different.

Most of our reviews are dedicated to fish finders—and Humminbird’s got some of our favorites. The MEGA 360, however, is not a fish finder—though it will definitely help you find fish.

You’d be better off thinking of the MEGA 360 as a kind of transducer, one that unlocks some of the latent potentials of your Humminbird Fish Finder. The MEGA 360 enables MEGA 360 Imaging on compatible fish finders.

What is MEGA 360 Imaging? You can think of it as rotating Side Imaging that gives you a 360° view of what’s going on around your boat instead of just showing you what’s happening from side to side. It’s a lot like the kinds of sonar you see in old war movies—except that it’s designed to help you catch fish, not ships!The funny thing is, it will help you find ships—sunken ones, anyway. But we’re getting ahead of ourselves.

As you can see, just about the only downside to this unit is its price point—and for such an excellent piece of technology, we think it’s well worth the price for enthusiasts.

What we will say, though, is that the fish finders that are compatible with the MEGA 360 all have top-notch displays, and great user interfaces. This is Humminbird we’re talking about—if you’ve read our reviews of its products, you’ll know we’re huge Humminbird fans. Once you’ve connected your MEGA 360 to its control head, you’ll find it’s just as easy to use—and easy to read—as any of your other imaging options.

The main difference between those other imaging options and the 360 is how refreshes are displayed. In most models, sonar history flows from top to bottom (for side imaging). With 360, however, it’s impossible for sonar history to move top to bottom or left to right, because you’re getting a full 360 view. Instead, Humminbird has included visual bars that sweep over your 360 view—when those bars pass over a point, data in that area is refreshed.

The whole process is incredibly intuitive—reading what we just wrote is probably a bigger brain teaser than just going out and using the thing. Once you’re on the water, you’ll pick up how to use the MEGA 360 in no time.

You’ll be happy to know that most of the display features you love are all here. You’ll be able to use split-screens to compare your MEGA 360 Imaging to other sonar charts, or to view your MEGA 360 Imaging and maps simultaneously. You’ll also be able to change colorways, zoom in on features, and more—it’s got all of the features of Side Imaging, all while covering a far greater area around your boat.

By using range rings, you’ll find it much easier to situate structure and fish in relation to your vessel. You’ll then be able to use structure to cast your line more accurately—say, 60 feet out—to where the fish are located. A simple feature—but a tremendously useful one.

Let’s talk about the technical details of the sonar that the MEGA 360 offers:

Most high-end transducers have access to the 455 kHz frequency. The 1.2 MHz frequency is what makes this device really stand out—that and, of course, its ability to provide imaging in a full 360° field of view around your boat.

And that 360 imaging is a sight to behold. Anglers who are reading this have probably already used side and down imaging—but in case you haven’t, here’s a refresher of what imaging can do for you. With imaging, you can:

All of these features are amplified by the 360. You’re getting imaging all around your boat, which makes scouting an absolute breeze. Normally, you’d have to make several passes around the area you’re fishing to find the best spots. With the 360, you’ll be able to find the best spots in half the time or less—your field of view (FOV) is just that much better.

The range of the MEGA 360 maxes out at 125’. That 125’ is telling you the radius of the sonar—which means you’re looking at a diameter or 250’. A little grade school geometry tells us that the area of a circle is  π x r^2, which means you can cover a huge area with just a single 360° sweep of your sonar.

Changing your field of view

While the MEGA 360 is designed to give you a 360° view of the water, that’s not always what you’re looking for. Sometimes, you’ll want to limit distractions on your screen. Fortunately, Humminbird allows you to reduce your FOV to as little as 10°. This enables you to focus on a particular point in the water column and zoom in on the perfect spot to fish.

Speaking of zooming, you won’t be surprised to learn that the zoom functions that you’d expect on a more traditional imaging chart are available here with the MEGA 360.

The refresh rate on your MEGA 360 is one of its most important functions. You’re sweeping over a large area, so historical data can get old rather quickly with a low refresh rate. As with all things in the world of sonar, there’s an exchange happening whenever you adjust your refresh rate:

There are 6 different refresh rates available with the MEGA 360. When scouting larger areas, we recommend using a higher refresh rate—once you’ve found something that looks interesting, switch to a lower refresh rate to get a more accurate scan of the structure or fish you’re looking at.

The sonar and imaging of the MEGA 360 are absolutely incredible. That’s why the transducer is worth so much—and why we highly recommend it to enthusiasts. It’s one of the best ways to scout for fishing spots—and one of the best ways to pre-fish a lake before a competition. You’ll get stellar, crystal clear images on any of the devices that the MEGA 360 is compatible with. Truly innovative design—props to Humminbird for developing this device.

When it comes to mapping, there’s not a lot to talk about—most of the mapping features will be handled by your control head. What is notable, however, is that you can place waypoints directly on your MEGA 360 Imaging chart. That makes this the perfect tool for scouting out new spots to fish—you can move along the body of water, placing waypoints as you go, then go back to those waypoints to do some fishing.

You might be surprised to see a networking section for a transducer, but there are a couple of things we absolutely need to cover for you to get the most out of your MEGA 360 transducer. Let’s start with the most important one—compatibility. From there, we’ll move on to how you can leverage your control head’s networking capabilities to your advantage with the MEGA 360.

As you can see, that’s a whole lot of different Humminbird fish finders that are compatible with the MEGA 360! That’s great news—especially when you consider the next networking feature we want to talk about.

Connecting your MEGA 360 to multiple devices

Here’s where things get really wild. You don’t need a MEGA 360 for each of your devices—as long as you have Ethernet cables. When connected to certain SOLIX and HELIX models, you can transmit data from your MEGA 360 to other devices connected on your network. That means everyone on your boat can have access to MEGA Imaging—all with one MEGA 360 device!

Note that you’ll still be getting the readings from the same place, so other anglers will have to keep that in mind when they’re using the device from, say, the opposite side of the boat.

The connectivity here really shines, and it’s another thing that makes the MEGA 360 well worth the investment.

When purchasing the MEGA 360, you’ll notice that there are four options available:

The universal mount can be used almost anywhere on your boat—generally, we recommend using the MEGA 360 off the bow.

By choosing to purchase the device without a mount, you’ll be left to find your own way of mounting it—a project we don’t recommend throwing yourself into with a device this costly. That being said, if you’ve mastered engineering mounts for devices around your boat, you may be okay. We’re not going to tell you how to live your life.

We’re beyond enthusiastic about this device. Being able to see everything around your boat is absolutely incredible. This may be the single best piece of imaging technology available on the market right now, and it can absolutely up your game to a whole new level.

If you’ve got a compatible device and you’re an angling enthusiast, we can’t recommend this device enough. Seriously—the only downside to this is the price. Even mounting this thing is basically no harder than mounting a traditional transducer. The price is, in fact, the only thing that’s preventing this device from getting the coveted 5/5 stars—something no device in our reviews has ever managed to get. The Humminbird MEGA 360 is as close as you’ll get to a perfect score—it’s well worth checking out.