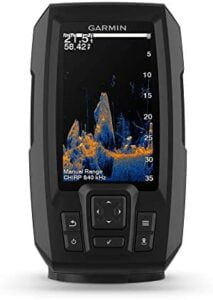 As fish finders continuously take the market by storm, it can be challenging to weed out the good from the bad. While many come at high price points, you never know whether it’s worth the investment unless it’s a Garmin fish finder. During its lengthy tenure, Garmin has launched many successful and affordable fish finder units and has really made a difference in the fishing world. The Garmin STRIKER Vivid 4cv is no exception.

The STRIKER  Vivid 4cv comes packed with all the features you’d hope to find, with the addition of some you actually wouldn’t expect. Its high-quality display screen truly lives up to the “vivid” aspect of this unit’s name, and its cutting-edge sonar technology is some of the best we’ve seen (and we’ve reviewed a lot of fish finders!).

If you’re looking to get your hands on fish finder tech with a boatload of features and a reasonable price tag, this is the device for you.

Throughout our review, we’ll review all aspects of the Garmin STRIKER  Vivid 4cv to help determine whether this unit will end up in your shopping cart.

While the Garmin STRIKER  Vivid 4cv is on the smaller side, it provides anglers with a simple interface and exceptional fish-finding capabilities. But like any other fish finder, the pros come with cons. We’re happy to say that the pros overwhelmingly outweigh the cons.

We aren’t going to lie; the screen is small. That may be a turn-off for some anglers who want more out of their fish finder display screen, but this little guy can produce some vivid images. ClearVü has a rep for diminishing noise and interference that you may find with other fish finder brands, so it displays clear images on your screen to help you determine what the sonar is picking up.

Traditional sonar displays blobs of color that make it difficult to see what’s happening, but the ClearVü shows easily distinguishable fish, vegetation, underwater structure, and more. The fish ID symbols are also easy to see, making it more efficient to spot nearby fish to catch.

You can effortlessly separate the display into two panels for both the sonar and GPS. What surprised us is that all the data is easy to read, despite the screen’s smaller size. The color for sonar readings is quite vibrant, and the LED backlight makes it much easier for anglers to see the readings. Most fishing enthusiasts prefer to fish on a warm, sunny day, so being able to see with a glare hitting your screen is always a positive.

The interface is pretty straightforward. It isn’t overly complicated like many other units on the market, and the buttons help promote user-friendliness. The main menu consists of indicators that help anglers know where to click.

The last thing you want is to fumble around with a fish finder device while on your boat, especially if you’re new to using these devices. You won’t have to worry about that with the STRIKER Vivid 4cv. Everything is easy to see and read, which is what you want when heading out on the water during a long-awaited fishing trip. If you want something simple, Garmin doesn’t overload this unit’s interface and display.

The ClearVü tech is what makes this fish finder stand out. Garmin has a habit of releasing reliable and affordable fishing units, but this one takes the cake (or the lake, if you like puns).

The ClearVü adds a level of clarity that you don’t get very often with other fish finder tech. When boating over underwater shrubbery, you won’t see obscured bumps or blobs on the screen. Instead, the sonar provides images of recognizable objects and structures to help you find the best fishing spots on the lake.

You can mark hot spots and return to them later if needed. What’s even more impressive is that you can mark boat ramps and docks for easy navigation during fishing trips. Just imagine not having to worry about where to find the nearest dock after a long day of fishing!

The STRIKER Vivid 4cv also features a built-in flasher to view nearby fish activity, as well as a speed display, and the tilt-and-swivel mount is exceptional for mounting on your boat’s dash. No need to constantly pull out the unit to see what’s going on under the water.

The attention to detail on this device is out of this world. The crisp images provide clearer fish arches and improve target separation. We have the GT20 Dual Beam transducer to thank for the improved clarity.

Instead of sweeping one frequency, the Garmin STRIKER Vivid 4cv CHIRP sonar will sweep numerous frequencies to provide valuable information to users. After a sweep, you can gaze upon a nearly photographic image that offers a reliable view under your boat.

The STRIKER Vivid 4cv will show you submersed objects and fish like no other device. If you pick up this unit, you won’t be disappointed in how clear the representation of fish can be. The sonar is incredibly easy to operate with the help of a keypad and buttons, and the device comes with mounting hardware and a cable for easy installation.

We know we already referenced a standout feature, but we would be remiss if we didn’t talk about this unit’s mapping capabilities, too. The ability to create contour maps is something we always admire about various fish finders, and Garmin delivers on that front.

The “QuickDraw” mapping ability allows you to create routes and mark hot spots using waypoints. In addition, all you need to do is click one button and sail around a lake. The areas you cover will be added to your custom map.

There are many icons and markers featured on this device so you can add a waypoint for your home or prime fishing spots. You can also name these points on your map for more readability. We understand that not every angler has the time to do so while out on the water, but Garmin is one step ahead; you can set up waypoints and coordinates in the comfort of your own home using Google Maps or another electronic mapping source. This device also lets you save up to 5000 waypoints, 50 tracks, and 100 routes.

Sure, this fish finder doesn’t let you store maps, but it gets you from point A to B and provides both water temperature and boat speed. What more could you need?

Only fish finder units with GPS capabilities will help you hone your fishing potential, which is why so many models will include a GPS module. The only problem is that most models come with high price points. The Garmin STRIKER Vivid 4cv is one of the only cost-effective fish finders with a high-sensitivity GPS. The GPS can locate precise locations and maintain locations anywhere on the lake. Seriously, this is a welcome addition for any angler who wants to get the most out of their fish finder GPS functionalities.

When it comes to networking, this fish finder is compatible with Garmin’s ActiveCaptain app. This app features smart notifications, remote viewing, wireless updates, and chart plotter control. It’s through the ActiveCaptain app that you can download data from the QuickDraw community.

We hope you’re tech-savvy because you’re going to have to download the ActiveCaptain app on your smart device. From there, your fish finder will generate a Wi-Fi network that connects with your smart devices, such as a tablet or phone. It’s important to note that the Wi-Fi doesn’t support internet access.

The app is free and allows you to create connections with the rest of the fishing community. Share charts with fellow anglers, observe maps, and stay connected while you’re enjoying your time on the water.

While it’s easy to get caught up in the specs and features like a Bass caught in a net, we can’t overlook the additional features that many other anglers might not notice.

If you have the option to mount your fish finder to a boat, it better be waterproof. Luckily, the STRIKER Vivid 4cv boasts an IPX7 water resistance rating. Unlike many other economy-priced fish finders, you won’t have to worry about low-quality seals or water seeping into your device. No matter how much it gets splashed, this Garmin fish finder will keep on running. The unit will continue working even if it gets submerged under water for up to 30 minutes.

An additional feature that we marveled at is the unit’s A-Scope. It lets anglers see fish passing through the transducer beam in real time. This type of identification cannot be achieved without the unit’s impressive Auto Gain technology. It gives fishing enthusiasts the extra advantage when looking to make a big catch.

Unlike the boring gray sonar imaging that you see with so many other fish finders (even some of the higher-priced units), the STRIKER Vivid 4cv provides up to several high-contrast color palettes to better identify fish, underwater structure, and more.

The tilt and swivel mount are included when purchasing this Garmin fish finder. It can rest easily on your boat’s dashboard as it secures your trusty fish finder unit. Almost any angler can tell you how rough some of the waters can be when boating. Knowing that your unit is safe and secure can give you some peace of mind. Plus, you’ll be able to conveniently view the screen while perusing the lake for fish and keeping tabs on trolling velocity.

Lastly, the built-in flasher offers some slight versatility while fishing. Most anglers will mount the STRIKER Vivid 4cv to their boat or kayak, but you can use it on the ice, too. The flasher function works well when fishing vertically over deep water and can also determine the depth of your lure and the fish below. This is helpful as it indicates where you should lower your bait to target fish.

In all honesty, this is the most efficient and affordable fish finder on the market, especially if you’re a budget-friendly angler. Not only would the Garmin STRIKER Vivid 4cv make a fine addition to your tackle box, but it can aid in improving your fishing game. Don’t let the size fool you. This Garmin fish finder holds some seriously powerful tech for a great price. We highly recommend it.