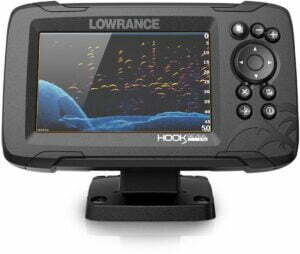 We’ve been incredibly impressed with Lowrance’s ability to create high-quality fish finders for an unbelievably low price. Their HOOK Reveal series has impressed us so far – and when it comes to the HOOK Reveal 5, we’ve got to give Lowrance a nod for keeping hobbyists with a smaller budget in mind.

This unit does almost anything you want a fish finder to do – it’s got imaging, great maps, a good transducer, and a whole host of features – all for under $500. We think it’s a great model for anglers looking to buy their first fish finders.

We’re going to take a look at the HOOK Reveal 5’s specs, and we think you’ll agree that this unit is punching way above its weight. While the included transducer might not go as deep as some more powerful units, the amount of features you’re getting with the HOOK Reveal 5 - including imaging - makes it one of the best fish finders under $500 on the market.

The display on the HOOK Reveal 5 comes with a few nice surprises. The screen itself is beautiful – we’ve been a fan of Lowrance’s SolarMAX screens for a long time now. You get a clear, backlit image that can be used in all kinds of weather conditions. Rain or shine, day or night, even in fog – no matter what the weather is like, you’ll be able to keep using your HOOK Reveal 5.

It’s worth noting that this screen is only 5” – that makes it ideal for smaller setups, but it’s usually not the best choice if you have a number of anglers who want to use the screen at the same time. The viewing angles for the unit aren’t bad by any means, but we’d recommend it for 2-3 anglers max.

The biggest surprise on the HOOK Reveal 5 is the split screen function. Split screens are basically industry standard on high-end fish finders at this point, so the fact that combination views are available isn’t what surprised us. What made us do a double take was that this unit has a 4-panel split screen function – pretty wild on a 5” screen.

Now, we wouldn’t necessarily encourage you to use the 4-panel split screen – it makes all the views a little smaller than you might like for checking your fish finder at a glance. But that’s a matter of preference, and if you, like us, prefer using a 3-panel split on a unit of this size, you can.

In terms of display options, this unit has a lot to offer. You can swap to Night Mode to automatically adjust the backlight and color palette for optimal nighttime viewing. You can customize the wallpaper of your home screen if you don’t like the standard gray-black. There are, of course, other display options – and we’ll talk about them in the Sonar and Imaging sections.

Now let’s talk about the interface. The menus are well-laid out, and the options of the HOOK Reveal 5 are simple enough to navigate through. There is, however, one major downside to the unit’s interface:

Touchscreens make it so much easier to navigate through a fish finder’s options – and with the HOOK Reveal 5, you’ve got to use buttons. The buttons on the unit are:

Many of these buttons can be used in combination for certain functions, like taking a screenshot. Altogether, it’s not too difficult to learn how to use them, but we do recommend reading the manual. It’s certainly not as easy as using a touchscreen.

One interface function that we really like is the ability to create and save custom pages (including split screen/combination pages) on your home page. You can save up to 9 custom pages, which makes selecting your most frequently used combination pages a very simple task.

All in all, the display and interface are solid, if not mind-blowing when compared to high-end models. For the price of the HOOK Reveal 5, we can’t complain – honestly, this is as good as it gets for under $500.

Let’s start with the transducer that comes with the HOOK Reveal 5, the SplitShot transducer. It’s not the most powerful transducer on the planet, but it compares very favorably to other transducers at this price point.

The SplitShot is a CHIRP (Compressed High-Intensity Radiated Pulse) transducer, which means the signals it sends out aren’t a single frequency – instead, it emits a pulse that contains a variety of frequencies. Without getting too deep into the technical weeds, CHIRP sonar offers more accurate results with better target separation.

The maximum range offered by the SplitShot transducer is 500 feet – not spectacular, but more than enough for many anglers.

In terms of how the HOOK Reveal 5 interprets data from the SplitShot, and your options for displaying that data, there’s a lot to like:

You can easily zoom in on the water column, or even use a split screen to display the zoomed-in column next to the full water column. You can lock on to bottom. You can adjust the range and sensitivity of the HOOK Reveal 5, use the surface clarity option when there’s a lot of wave action, or even adjust the scroll speed. There are a lot of other options available, too.

One thing we love about the HOOK Reveal 5 is how many color options there are – there’s a wide variety of different color palettes, and you can adjust the colorline, too. There’s also Fish ID, a great choice for folks who aren’t used to reading sonar charts. Fish ID replaces fish arches with fish icons to simplify reading the chart.

All in all, we’re very happy with the variety of sonar options on this unit – you can even record sonar readouts. While Lowrance might not be innovating very much with the HOOK Reveal 5 in the sonar department, the fact that they’re offering this many high-quality options on such a low cost unit continues to impress us.

While the HOOK Reveal 5 doesn’t offer SideScan, it does have DownScan – and it’s fairly powerful, at that. You can opt between using the 455 kHz frequency for longer range, and the 800 kHz frequency for clearer imaging.

Much like with the unit’s sonar, there’s a lot to like in terms of imaging options. You can adjust the color palette, zoom, range, and contrast. We recommend playing around with the color palette until you find one that suits you – for range and contrast, the automatic settings worked quite well for us. When there’s a lot of wave action, you can also adjust the surface clarity option.

One of the best features on this unit is FishReveal, which allows you to display sonar fish arches on your DownScan view. You can also adjust the sensitivity and colorline for your FishReveal, as well as adjust surface clarity.

The DownScan option only provides imaging below your boat, so it’s not ideal for scouting and pre-fishing lakes before, say, a tournament – but it is certainly better than no imaging at all. We love finding bottom structure with DownScan, and while there are more powerful options on the market (some with frequencies exceeding 1 mHz), it’s almost impossible to find a unit this powerful for under $500.

Again, the HOOK Reveal 5 punches above its weight.

WARNING: do not get the GPS-only model, sometimes called the Lowrance HOOK Reveal 5x. While the 5x is cheaper, it does not come with any maps, and you cannot load new maps onto it. If you want mapping (and for $50 extra you might as well get it), do not buy the HOOK Reveal 5x.

First, the unit comes with one of a couple of different map packs, including C-Map Contour+, which offers 1’ contour maps of 15,000+ U.S. lakes and 9,400 Canadian lakes – an incredibly impressive repertoire of maps. The navigation data includes tide/currents for coastal bodies of water, points of interest, and a whole lot more.

Even if you go with the 4,000 US Lake map, however, you’re getting high-quality maps with a lot of detail. And when it comes to compatibility, Lowrance is hard to beat – the HOOK Reveal 5 is compatible with both Navionics and C-Map charts.

Of course, all of the charting options you expect are here – you can create waypoints, routes, and tracks, which is useful for when you want to save your favorite fishing spots or pre-fish a lake.

Last (but certainly not least), the HOOK Reveal 5 offers Genesis live, which allows you to use your GPS and transducer in tandem to create your own 1’ contour maps. This feature is a great way of expanding the number of charts you own without having to purchase additional charts. You can also share these charts with other anglers, and download charts that those anglers have created – all for free.

Networking is the one area where the HOOK Reveal 5 falls short. Some of you may remember the days before the internet was popular, when data had to be transferred using floppy disks.

While we’ve moved beyond the floppy disk, the HOOK Reveal 5 still relies on sneakernet. In other words, to transfer data, you’ll need to put your shoes on, walk the microSD card from your HOOK Reveal 5 over to your PC, backup the data you want from your card, then bring the card back to your fish finder.

That’s not the most convenient way of getting data around, but should work fine for uploading/downloading Genesis live charts. But don’t look at the HOOK Reveal 5 as a control head for your whole vessel – this thing isn’t even NMEA compatible.

There’s one additional feature that we wanted to discuss (though there are plenty of small features that didn’t make it into the review). That feature is auto tuning sonar. There are a lot of things that make this unit an excellent choice for beginners, and the auto tuning function – which automatically sets sensitivity and range for you – is one of the best. It makes the HOOK Reveal 5 more or less plug-and-play.

This is one of the most exceptional fish finders you can get for under $500. It’s perfect for beginners, and great for hobbyists who have a smaller budget. Lowrance has really outdone themselves on this one, which is why the HOOK Reveal 5 appears on our best fish finders 2021 list.

Truly wonderful stuff! How Lowrance keeps making high-quality fish finders that are this inexpensive, we don’t know – but we hope they keep it up.