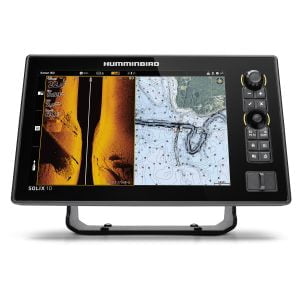 If you’ve read our HELIX reviews, you know we’re big fans of Humminbird’s high-end fish finders. We were, of course, absolutely thrilled to get our hands on a SOLIX 10.

We’re going to say right out the gate – this thing is expensive. But what you’re getting for the price is one of the best fish finders on the market. Honestly, there are few competitors who can put up a fight against this thing. The SOLIX has some of the best imaging we’ve ever seen. It’s got incredible range. It’s got loads of features.

And, finally, thankfully, it’s got something we want to see on every fish finder from here on out. It has a touchscreen AND buttons controls and – get this – a joystick.

Yes, the innovation that Nintendo masterminded on the N64 has finally reached the world of fish finders.

You’ll see in the pros and cons that the only real knock against this thing is that it’s pricey, and that it doesn’t come bundled with more maps. Prepare for a glowing review:

Let’s start with the display. It’s everything you’ve come to expect from Humminbird. A 10” screen is easy to see from a variety of angles, so it’s handy if you’ve got a lot of anglers in your vessel who want to get info at a glance.

It’s also backlit, which is industry standard. That means you’ll be able to use it rain or shine, or even for night fishing. The screen is also HD, which is going to come in handy when you’re using the SOLIX’s very sharp imaging technology.

The display allows for customizable views that feature split screens. You can display up to four screens at once on the SOLIX 10 – you could, for example, have a chart, a sonar graph, Down Imaging, and Side Imaging all displayed at once. There’s also a sidebar overlaid on every view, so you can check things like depth and temperature at a glance, no matter what page you’re on.

The customizability of this unit is honestly astounding. There’s a wider array of different color palettes than we’ve seen on almost any other fish finder. You can change the color palette for the things you’d expect, like sonar and imaging, but you can also swap the color palette for your charts. This is a wonderful tool for folks who are visually or color vision impaired, and excellent for people, like us, who just revel in having aesthetic choices.

Let’s talk about the interface. It’s a thing of beauty. Touchscreens, by far, are the best way to navigate fish finders. Unfortunately, they get wet, and when they do, they lose a lot of their utility. The SOLIX 10 makes up for this without resorting to clunky arrow keys. They’ve got a joystick. They have enter and exit keys. They also have buttons for zooming in and out, taking screenshots, routing to particular waypoints, activating the sidebar, selecting specific panes in multi-pane views, marking waypoints…the list goes on. Oh, and we almost forgot to mention, they have a rotary dial for quickly adjusting things like sensitivity.

That means you can do everything you could do with your touchscreen quickly and easily with button controls. This unit is incredibly easy to use – it’s the least clunky line of fish finders we’ve ever touched.

Great controls are almost meaningless if menus are poorly laid out. Fortunately, that’s not the case with the SOLIX 10. You can quickly access all of your favorite views no matter what screen you’re on, because the sidebar always includes a shortcut to them, above the display of vital information. The menus are incredibly easy to navigate.

We give top marks to Humminbird for the SOLIX 10’s Display and Interface. It may be the best one we’ve ever used.

If a fish finder is only as good as its sonar capabilities, then the SOLIX 10 is one excellent fish finder. You can tell, just by glancing at the frequencies it supports, that this thing was built to help you find fish no matter where, when, or how you’re looking for them.

CHIRP (Compressed High Intensity Radiated Pulse) is industry standard for high-end fish finders like the SOLIX 10, so it’s no surprise to find it here. What’s so impressive is the array of different CHIRP settings the unit supports.

With the transducer that comes bundled with the SOLIX 10 (we’ll talk more about that in Imaging), you get two different CHIRP cones: Narrow Mode (75-155 kHz) and Wide Mode (130-250 kHz). For depth, you’ll choose the Narrow Mode, while for more coverage, you’ll choose the Wide Mode. If you get transducers with lower frequency ranges, you can also access Full Mode and Deepwater Mode, which give you cones that go even deeper.

That means that if you’re an angler who fishes in a wide variety of different environments, this unit has you covered. Whether you’re fishing in water columns that are 30 feet or 3000 feet deep, you’ll be able to use your SOLIX 10.

CHIRP sonar, as you may know, provides much more accurate readings and target separation than traditional sonar. That means that you’re not only getting a variety of frequencies – you’re getting quality, too.

Before we get into imaging, let’s take a brief moment to talk about the transducer. For this review, we’re talking about a particular transducer: the XM 14 HW MSI T. 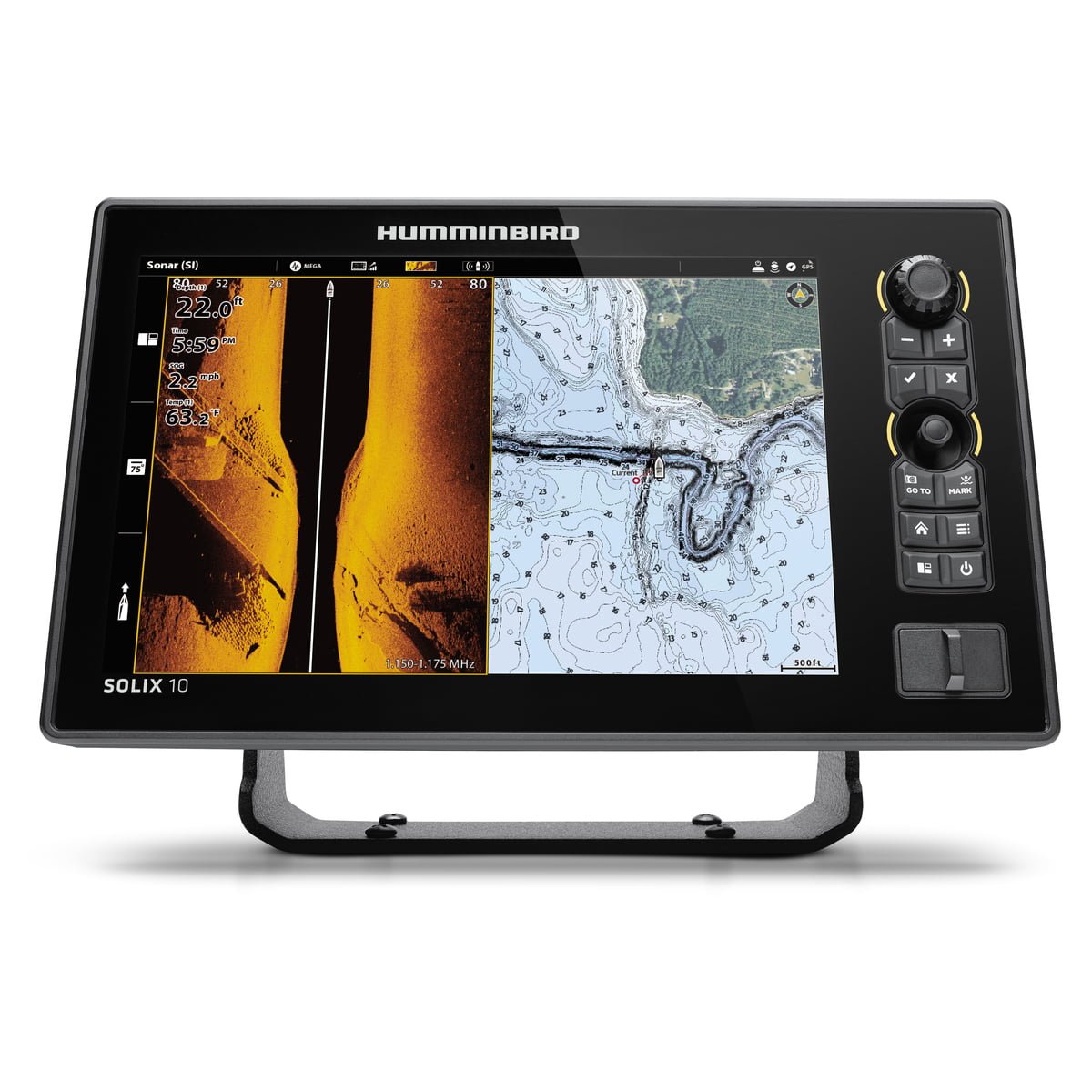 comes bundled with the unit.

With that disclaimer aside, let’s talk about the imaging on this unit – both Side Imaging and Down Imaging. The basic idea of imaging technology is that it gives you a detailed view of structure. This makes it easy to find the best fishing spots. You can also see fish with imaging technology, but most anglers prefer to use traditional sonar for their actual fishing.

The clarity of the SOLIX 10’s imaging is almost unprecedented. That’s because the transducer can send out frequencies in the MHz range. With transducers, the higher the frequency, the clearer the image. What’s astonishing about Mega Side/Down Imaging is that you get 250 feet down AND per side, which is better than the range of some other imaging software in the kHz.

We’re not totally sure how Humminbird did it, but we’re impressed.

It’s worth mentioning that your imaging is also quite customizable – and you can do it on the fly. You can zoom in and out, change the sensitivity, adjust the contrast, and change the color palette with just a couple of presses.

You can also buy a MEGA 360 Imaging transducer if you want to be able to see all around your boat at a glance. It’s very powerful, and one of the best pieces of 360 view imaging technology out there.

All in all, the SOLIX 10 has top-notch imaging, even if you don’t get the 360 transducer. We love it.

One of the (very) few knocks against the SOLIX 10 is the limited number of maps it comes with – you can only get it bundled with the Humminbird Basemap. Now, to their credit, Humminbird’s Basemap is one of the better basemaps out there – it comes with 10,000 U.S. Inland Lakes.

That’s not too helpful for anglers in Canada, though.

Nonetheless, the unit is compatible with a wide variety of different maps. You can use Navionics maps, and, of course, Humminbird’s well-loved LakeMaster and CoastMaster series of maps. You’ll have to buy them separately, mind you, unless you were already using Navionics maps with another fish finder/chartplotter.

Those of you who have read our other reviews know that we love talking about the use of a fish finder/chartplotter. Combining your GPS with your transducer is better than having either alone – not only does it save space, but it gives you the chance to integrate some nifty features. Features like AutoChart Live.

AutoChart is one of the best contour mapping features on any fish finder. You can map not only contours, but bottom hardness and vegetation, too. You can even overlay your Side Imaging on top of the charts you create.

Perhaps best of all, you can use AutoChart LiveShare to share the charts you make – and to download other people’s charts. It’s a great way of expanding the number of maps that you have, and a nice way to give back to the community.

There are a bunch of other map customization features available on the SOLIX 10. From being able to change what overlays you have active to the colors used to display depths. You can even enable anti-collision and waypoint avoidance alarms. There’s even a handy search function for locating nearby waypoints. All of this more than makes up for the limited number of maps that come bundled with the unit.

The networking on the SOLIX 10 is top of the line. It’s got an Ethernet port, Wi-Fi, and Bluetooth. It’s NMEA2000 compatible, and it can connect to a huge variety of Johnson Outdoors devices.

That means it’s compatible with a slew of different devices. Radar, AIS – it’s even compatible with Fusion Radio, for those who want to enjoy some tunes when they’re out on the water.

There’s not a lot to say about the networking features other than that the SOLIX 10 is compatible with just about any other toy you want to take out on the water. The more devices you have, the more features you unlock on the SOLIX 10, so it’s a perfect unit for anglers who have a lot of electronics they like to use.

Because of its incredible networking capabilities, the SOLIX 10 has a ton of features – it would be impossible to cover all of them here. Instead, we’re going to take a look at a couple of our favorite features.

We’re going to give you a nifty way to automate basically all of your fishing. It’ll cost you extra, but it makes things so easy we’d be remiss not to mention it.

The first thing you’ll want to do is get SmartStrike. These cards are only available in the USA right now – sorry Canadians – but they basically automate finding fish. You tell the SmartStrike software what kind of fish you’re looking for, the weather conditions, the season, the time of day, and the wind. It tells you where to go fish. It’s as simple as that.

It’s so easy it’s almost criminal. Now, doing both these things can be costly, but if you’re into expensive toys, it’s a lot of fun.

The SOLIX 10 is next to perfect. Now, it’s designed with a particular angler in mind – one who wants to fish in a wide variety of water columns, and who wants the clearest possible readouts. Tournament anglers and enthusiasts are who Humminbird had in mind. For them, this fish finder may be second to none.

View our best fish finders for 2021 if you’re interested in some of the other models we love – you’ll find the SOLIX 10 toward the top of the pack.