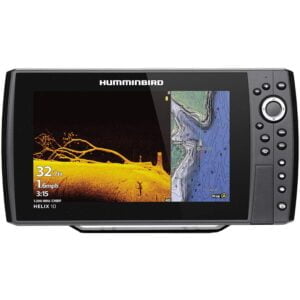 Long-time readers will know that we’re huge fans of Humminbird’s HELIX and SOLIX series – you might have even read a review or two that we’ve posted. This is the latest generation of HELIX 10 – the HELIX 10 G4N. What does G4N stand for? We can’t say for sure, but if we were to hazard a guess, we’d say it means “Good for Networking”.

As you’ll soon learn, networking is one of the things this unit does best – it’s like a charismatic business owner looking to make connections. That’s not the only great thing about the HELIX 10, though. As we’ve come to expect from the series, there are incredible features, a gorgeous display, excellent imaging, and a whole lot more, all in one beautiful 10” fish finder.

We’re going to take you through everything you need to know about this unit, from its interface to its sonar (and a whole lot more). Before we get into that, though, we’re going to look at what’s under the hood. The HELIX 10 comes in 3 different models - one with CHIRP, one with CHIRP + Down Imaging, and one with CHIRP + Down and Side Imaging. The only difference between these models is the transducer that they come with, but we’ve gathered all three different versions here for posterity’s sake. Choose the one that best suits your needs!

The HELIX 10 has a high definition 10” display. It’s backlit, so you can fish in murky weather, at dawn and at dusk – and we all know those are some of the best times to catch fish. Humminbird did a great job relegating the unit’s controls to the slim section at the right-hand side of the screen.  The screen takes up the bulk of the unit, which means great viewing angles without any visual clutter. We’ve even found the screen is fairly clear when the sun is beaming down on it – all in all, a job well done by Humminbird.

Now that we know how the unit looks, it’s time to talk about how it feels – that is, how easy it is to use and navigate. This is where we come to the first – and arguably only – flaw of the unit.

We understand why they didn’t include a touchscreen. That’s a feature reserved for their SOLIX line, which has (in our opinion) the best user interface of any fish finder on the market. And yes, touchscreens are more expensive. The HELIX 10 isn’t exactly inexpensive to begin with, though, and we think the extra cost of a touchscreen would be well worth the benefits. Touchscreen + button (and joystick, like the SOLIX) navigation is the future.

Fortunately, the unit is fairly easy to navigate despite the lack of a touchscreen. With the touch of a button, you can access shortcuts to your favorite pages and views, set up new views, mark waypoints, open menus, toggle the backlight, and much more. The menus are all fairly intuitive to navigate – they’re dense, however, so it might take a bit of time to learn where the features you want to access are hidden.

One feature to highlight about this display is the split screen functionality, which comes more or less standard on high-end fish finders in the modern era. You can split your display to show multiple screens at once – you could, for example, display a map, side imaging, and your traditional sonar chart simultaneously.

Speaking of traditional sonar charts, it’s time to review the sonar! We’ll do this in two parts: By taking a look at the transducer that comes with the unit and by talking about some of the features you’ll find on the sonar chart itself.

Depending on the model of HELIX 10 you purchase, you’ll get one of three different transducers – the only difference between them, however, is whether or not they offer side and/or down imaging. All of the transducers that come prepackaged with the HELIX 10 are high-quality CHIRP transducers.

A quick note on CHIRP – it stands for Compressed High-Intensity Radiated Pulse. Developed by the military (and quickly scooped up by fish finder manufacturers when the technology became public), it emits several frequencies simultaneously in a pulse. This leads to a greater degree of accuracy and better target separation.

With Narrow, Wide, and Full cones, you can easily switch between cones (and frequencies) depending on what you’re doing. Use the Wide mode when you want to scout for fish and the Narrow mode for when you’re honing in on your targets, with the Full mode acting as an excellent intermediate if you don’t want to bother switching between modes.

The transducers that come packaged with the HELIX 10 are stellar (especially when it comes to imaging, which we’ll discuss later). The options for your sonar charts are just as good as the transducers themselves – and that’s saying something.

Every sonar-related feature you can want is here. You can swap between color palettes to find the one that works best for you. You can switch on Fish ID to replace sonar arches with fish icons – perfect for folks who are new to using fish finders. You can adjust sensitivity on the fly, zoom in to a particular section of the water column, omit parts of the water column, change the speed of your chart, switch to ice fishing mode, and a whole lot more.

It would be impossible for us to go over all of the features of the HELIX 10’s sonar charts, but we’ve found everything we’ve ever wanted in terms of sonar chart features (and more) here. Humminbird gets top marks for this one (as they so often do when it comes to sonar).

If the HELIX 10’s sonar is great (it is), then the HELIX 10’s imaging is unbelievable. We highly recommend the Side Imaging model to get the most out of the imaging features on this unit – they’re truly something to behold.

To start, you’ll notice that in the specs section we mention a 1.2 MHz frequency. That’s not a typo – that’s some of the clearest imaging you’ll find on any fish finder, at any price point. It’s almost like having a video camera underwater – James Cameron, eat your heart out. You’ll be able to spot structure all along the bottom and sides of your boat.

The 1.2 MHz imaging (MEGA Imaging, as Humminbird calls it) does limit you to 200 feet down and per side – but you can always switch to the 455 kHz mode if you need more range. You’re going to get an unprecedented look at what’s under the water. If you’ve never used imaging before, prepare to be blown away.

And as with sonar, there are tons of options when it comes to imaging. You can change your color palette, hide information you don’t want to see, adjust sensitivity on the fly, and change the parts of the water column that you’re viewing. There are tons of indicators, including the frequency you’re using, the parts of the water column you’re viewing, and a whole lot more. All of this is on the unit’s beautiful display, and you’ll be seeing the water like you never have before.

The HELIX 10 gets the highest marks for imaging – a truly impressive feat by Humminbird.

We love maps – there’s a reason fish finder/chartplotter combos always perform so well in our reviews. After all, setting a route to your favorite fishing spot can save you a lot of time, and using imaging and mapping in conjunction for pre-fishing a lake before a tournament can give you a huge edge.

We’re happy to say that, when it comes to charts, the HELIX 10 delivers. The unit comes with the Humminbird Basemap out of the box, and it’s one of the better basic map sets we’ve found. These are detailed contour maps featuring points of interest, navigational aids, and much more. You get coverage for over 10,000 U.S. lakes and the entire US Coast Region – all right out of the box.

The unit is also compatible with the LakeMaster and CoastMaster series of maps. If you’re not keen on buying maps and the Basemap set doesn’t have what you’re looking for, you can always make your own maps using AutoChart Live, which allows you to map depth contours, bottom hardness, and vegetation by using your transducer and GPS in tandem.

Thanks to the unit’s 2 SD card slots, you can save a ton of the maps you make or purchase and even share the maps that you make using AutoChart Live online. That means you can swap homemade contour charts with your fishing buddies – pretty fun!

All the mapping features you’d expect are here, too. You can mark waypoints and make routes and tracks. You can switch to a bird’s eye view and change the color of your background. You can hide and display various overlays, points of interest, and more. Humminbird has done excellent work with the charting software on the HELIX 10.

We mentioned at the top that G4N might stand for “Good for Networking”. Here’s what we’re talking about. The HELIX 10 has the following options for networking:

All of that, plus 2 SD card slots, makes it incredibly easy to connect your HELIX 10 to just about anything. The unit also connects seamlessly to other Humminbird, Minn Kota, and Cannon products using the “One-Boat Network” functionality.

Basically, if you’ve ever dreamed about having a ship that’s rigged up with all kinds of fish finders, all connected and working together, the HELIX 10 G4N is for you. It’s got everything we’ve ever wanted in terms of networking – we’re impressed.

There are a ton of features baked into this thing that we haven’t talked about. It’s SmartStrike compatible! You can use it in tandem with CHIRP Radar and AIS technology! You can use SwitchFire to reduce clutter on your sonar screen!

The list goes on and on – the HELIX 10 is jam-packed with features. Try it for yourself, and you’ll see what we’re talking about.

The HELIX 10 is one of the best high-end fish finders available on the market. Aside from the lack of touchscreen, we love just about everything this unit has to offer. It’s fast, it’s got great memory, it connects to just about anything, and it’s loaded with incredible features. We love the imaging and sonar. We love the display. We love the HELIX 10 – and we think you will too.