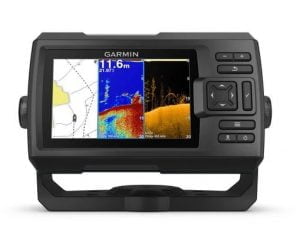 One thing we absolutely want to hammer home: this is not a chartplotter. There’s a built-in GPS, but there are no maps, and you cannot add any maps. You will need a separate chartplotting device if that’s what you’re looking for.

The device does, however, have some mapping features - we’ll discuss those in the mapping section. And as a fish finder, it’s really quite good - not mind blowing, but high-quality. Let’s take a look at the specs:

Let’s begin, as always, with the display. You get a surprising amount of bang from the 5” screen on the unit. The screen is bright and backlit, meaning it can be used rain or shine – as well as in fog and darkness.

One feature we were thrilled to find on this unit is combination screens. Now, combination screens are more or less standard in fish finders at this point in time – but they’re generally found on larger, more expensive units. You can display up to three panels simultaneously, and you can give priority to the most important one.

Despite its relatively small size, we found that anglers could quickly pick up information at a glance from various points on our vessel. Vital information, like water temperature and depth, are constantly displayed in an overlay.  Of course, it’s not quite as easy to read as a larger model, but it does the job.

Sonar always depends on the transducer you use with your fish finder. In the Specs section, we listed the unit’s sonar depth at a maximum of 1900 feet. That’s with the in-the-box transducer – with a different transducer, its depth capability will change. 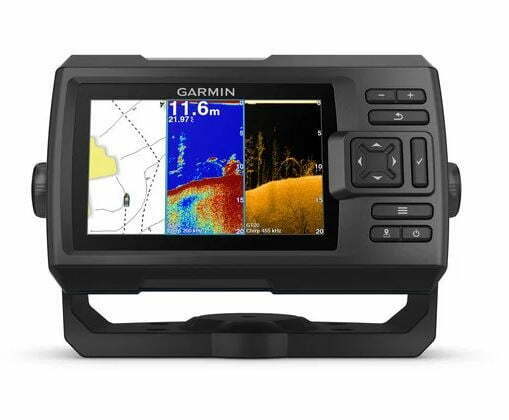 On-screen navigation is still available – the screen will be blank, aside from your waypoints, but it’s there.

Quickdraw is Garmin’s contour mapping feature, and it’s good. Your sonar is used to trace 1’ contours, giving you an easy to read map of what’s going on below the water. You can set your waypoints and routes over this map. You can store up to 2 million acres of Quickdraw maps on your unit – more than enough for most anglers.

With the transducer Garmin includes in the package, you get ClearVü down to up to 750 feet – that’s remarkable depth for a fish finder in this price range. There are much more expensive models that don’t provide that range of Down Imaging.

Now if all of the images were completely muddled, that wouldn’t mean much at all. But the imaging here is quite good – not stunning (it uses 455 kHz at max range), but good.

And it’s worth mentioning that this is CHIRP sonar, which makes the quality even better. You’ll be able to see structure (and more importantly, fish) in clear detail.